This will be a two parter, so venture back here tomorrow for the Player’s Edition.  But for now…

Its pretty clear that I’m not a big fan of Bioware at this point in my life.  And they have reeled drunkenly from failure to failure in a way that is almost gawkworthy.   The latest example I can give you is when I went to rename my characters for this past weekend.  I lost out on my first choice because, when you click a character to play that doesn’t have a name and it prompts you to rename, you’d think that you were being prompted to rename *that* character.  The one you just hit the big PLAY button for.  And you’d be wrong. 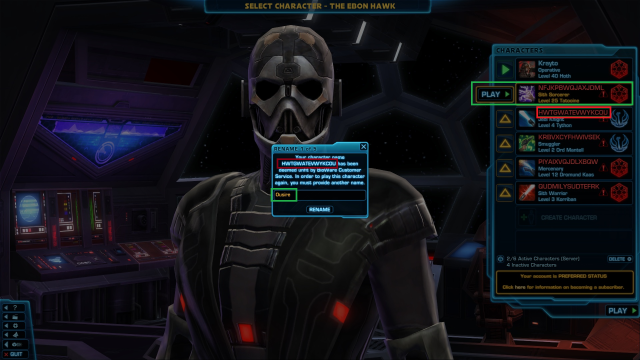 What I finally figured out I think was that it prompted a renaming process, in reverse order of character creation – in other words, starting with your newest creation and proceeding to your oldest.   In any case, my Jedi Knight ended up with my Sith’s name, and my Sith ended up with…well, about my 8th choice, because everything else was taken.

But when you are that bad, making sloppy mistakes left and right, sometimes, the mistakes actually work in the opposite direction.   Some of them can be hilarious, like when players realized with the new Bolster system in PVP taking into account gear scores, that it was actually better for them, statwise, to fight naked (for even more hilarity, that link is to the French players complaining/rejoicing).   Soon Nude PVP will be the wave of the future.  You can combine it with a dedicated Singles server for even more fun.  The creative side of me desperately wants to shoot a a cover video of Methods of Mayhem’s Get Naked video with Darth Vader taking Tommy Lee’s place, and perhaps the Emperor covering George Clinton’s part with a “Doin’ it Sith style” voiceover.

If you have no idea what I’m talking about – be glad.  I wouldn’t either, but working with teenagers sometimes introduces you to parts of live you would never have otherwise known about, lol!

Anyways, to get to the point – there are also times when messing up has an unintended positive consequence for the players – sometimes being bad is good.    Wargaming made a goof in the last update on the Russian servers with a shell price, and the end result was that some players ended up selling off a load of shells for ten times more than they had bought them for.  Instant profit!  But Bioware has to do everything better, so they messed up in real world econ, and I profited.   You are supposed to get 100 Cartel Coins a month for having a security key, right?   Check my ledger… 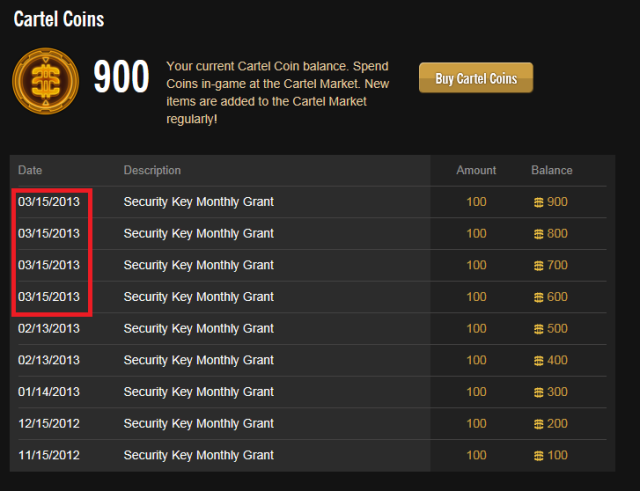 Needless to say, those coins weren’t on my ledger for long.  I burned plenty this weekend, while I could.  Did it make up for all the Bioware fails to get a few extra Legacy perks and an account wide Unify Colors unlock?   Not really.  But it did make the weekend and the playtime more palatable.   I’d like to think it wasn’t a mistake, but rather some nice developer down in the vaults that read one of my posts and had a little “oops” with my account balance, but that’s just my glass-half-full side talking.  It only lasts until I unified the colors on my agent and found that my green chestplate produced some brown pants and a matching brown helmet.   I’d be mad, but since I got it for free…close enough, Bioware.  Close enough.