So my second chance at life, granted to FFXIV after so many people testified that it is a game that sometimes takes a second chance to grow on you, has taken root.   I am currently an active subscriber to Final Fantasy.

That’s the Official Brother of Harbinger Zero ™ standing in the background there.   We’ve been running through the main storyline quests together as a Lancer and Arcanist, although when we hit the patch of storyline dungeons thought I switched to conjurer to get us into a group faster.

I wasn’t too sure about that at first – forcing players to do instanced group sessions is a tricky sell I think – but I have to admit it worked out pretty well.   While we decided afterwards we would not have wanted to tank those dungeons (they seem a bit twisty and turny for breaking in new guys), it worked out well in giving you some mechanics and a few minor twists to work out. 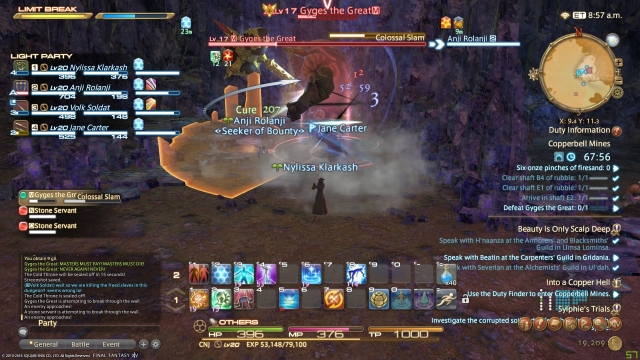 And I thoroughly enjoyed healing again.   Its been a long time since I’ve had to work at the heals, and I’m happy to say that no tanks were lost in the making of this screenshot.

I also discovered that FFXIV builds in some tools that normally required mods and add-ons.  You can see in the picture above that there are numbers/letters next to our group names.   A for whoever has the aggro, and 2/3/4 for the ranking the rest of us are holding.

I also am appreciative of the target of target window on the left hand side, which allowed me to move quickly back and forth between healing and dropping the occasional DoT.

I still haven’t figured out the Limit Break stuff though, I need to spend time time in the Wiki puzzling that one out.

And of course, how can I not compliment the Job system?   It keeps the game fresh to know I can log in and with a button click change my playstyle while keeping my character and progress.  I enjoyed watching the Bard in the dungeon screenshot up there going to work, so when I get tired of casting spells, I port over to Gridania and work on my Archer skills.   In other MMO’s, that would feel like time lost down the black hold of Alts-ville, but here it seems added value.   It may not actually be any added value – after all, its not really any different than leveling an alt in another MMO, but for some reason, I don’t have any of the angst or hand wringing about whether or not I should be playing my main instead.   So whether psychological hand-waiving or genuine difference, I don’t know, but either way, it works for me.

In any case, its good to be back in a fantasy world, carving things up, enjoying quest text, and generally being a hero.   We’ll see how long it lasts, but so far, its looking very good.