I’ve seen some good coverage of Trion’s move to offer the Storm Legion expansion for free if you pony up for a year long sub.   Some good discussion about whether or not its worth it in the end.   And some good reminders that Trion continues to take what others do and both copy and improve on what it sees.

It was the former though that got me thinking about one thing that Trion has done right that we so often complain about.   This deal with the Storm Legion pack is a great promotion, because unlike many others done by other MMO’s – it most directly benefits current subscribers.   As Flosch points out, you really have to play 7 or 8 months to come out ahead in the promotion.   That’s something that is great for the loyal subscribers who love the game and are sticking with it long term.   Its not as enticing to those who are new or who are half-hearted in their dedication.

And please note this is a little different than Blizzard’s Diablo III offer because the free program here is a direct benefit of the game you love, giving you lots of extra content for it, rather than stealing your precious time away into a side project.

I think we’ve all said this before, but…would that Bioware had taken a good look around itself in the last year or two, the shroud of the dark side might not have fallen as hard and fast as it did.

Loyatly is more than just Veteran Rewards.   Its listening, crafting opportunities to reward those who invest time and effort, and regular feedback and thanks in return for what is given.   Trion does that as well or better than anyone afloat right now, and its a part of what makes them as successful as they have been.  Others…take note!

Its been almost a week…maybe more actually, since I played Rift, and I’m having a little withdrawal issue.  Especially this close to the finish line… 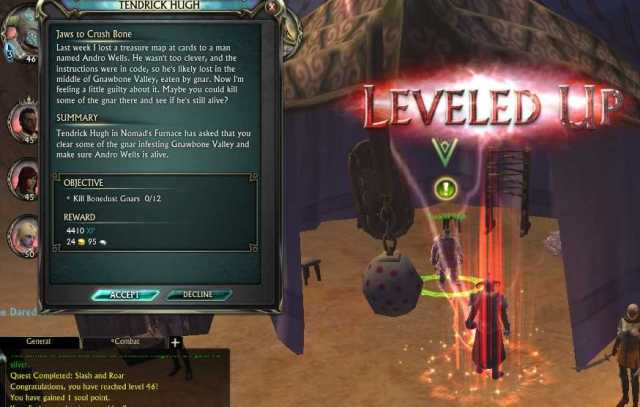 Rift.  I’m currently trucking through my 29th level as a Cleric, and for once, alt-itis has not really struck.  Kudos for the billionth time to Trion for making a character creation system that has loads of flexibility.  I currently have a casual questing role (Justical/Sentinal/Inquisitor), a raiding healer role (Sentinal/Warden/Purifier), and a third role that I swap out for fun when I get bored.  Right now its kind of a farming role – a Cabalist/Purifier mix with the third soul (with 0 points of course) being rotated as needed to keep things fresh.   The world events and “programming” unleashed by Trion are excellent.  I think some of us questioned if this new variation on Public Questing was going to be problematic, but its so dynamic and fun, it seems hard now in retrospect to even try to compare them.  I have some minor quibbles, but nothing worth writing about at this time.  And I have to say thank you again to Trion for spoiling us bloggers by bringing us along on the ride from the very early phases.

World of Tanks.  Not only did I get sucked in, when 9 months ago I would have told you there was no way I was playing this game, but so did my brother and dad.  The end result has been mayhem.  A full three man platoon to roll with any night I want to.  I wanted a full on gaming group as one of my goals this year, I just didn’t realize it would take this form in this game!  Speficially, since launch I have dedicated myself to US Heavy tanks.  Initially I wanted the T29, as I admired it in Beta, and specifically the way a skilled player could capitalize on its strengths and minimize its weaknesses (incidentally, from my win % in her, I’m going to admit I’m not a skilled player lol).  But when the full tree changes were announced and I realized that if I just dug a little deeper, I could grab a tier 8 premium in the T34 – and specifically, have a nice premium tank that looked and played just like the T29, I had my goal set.  Currently, I have enough XP to grab it, but since the patch is still 2+ months away, I’m sitting on the free XP I’ve converted and started working my way up the Russian and US medium lines.  And here I confess that I am a medium tank player at heart.  My win % and XP earned stats on medium tanks is consistently higher than with the US heavies.   The patches continue to improve the game, and I think concerned about matchmaking are over rated.  WoT still needs to do more to address the “invisible tank” problem, but other than that, they are in good shape.

Nothing.  I’m actually not currently in any Beta’s or testing programs at the moment.  I was never able to get Gods and Heroes working, so…I can’t really tell you if it was good or not.  Perpetuum still intrigues me, but since I have no itch to play EVE at the moment (even less with Incarna out – I don’t get the whole desire or issue myself), I’ve put it on hold as well.

So, if you need someone to play and test (or write about) your game or your Beta, give me a yell.

What I’m Not Going to Talk About…okay, yes I am.

The Old Republic.  Seven months ago, I went ahead and joined a TOR guild, thinking it would help keep a check on my impatience for the game to come out, and help me settle into some good relationships for a game that, by all accounts seems to be just as fanatically multi-player as it is fanatically single-player (how these two worlds will mesh in reality is still a good question I think).   I recall thinking that I wasn’t sure I could wait another 4-6 months for the game to come out.  I was concerned that my brother would not be back from Russia in time (he spend the first 6 months of this year living over there) to be in the game at launch with me.   But mostly I was worried because there was every indication that the game was not actually 4-6 months away.  For those who don’t believe me, I have a draft of a post I wrote but never published (happens more often than you think) from last October, arguing those points.  And I was right.   And it dawned on me yesterday that there is still no indication that the game is no closer to launching than it was last Fall.  In other words, I have patiently made it through the time I wasn’t sure I would make it through, only to find that I have made no progress whatsoever.  This is another definition of hell is it not?  Add to this the multiple confirmations that the game will have no Open Beta (riddle me that one Batman…) and this means that launch will be launch, with no teaser a month before to scratch the itch.

To put this in perspective for you: would you be surprised if there was an announcement that the target date was moved to next Spring (2012)?  Me either.

I’m not sure what else to do here other than keeping marking time.  And my stance is well documented – the longer this takes, the more they push it back (and don’t let them kid you, it has been pushed back, whether they published an official date or not), the worse things are.  You can argue that if you like, but MMO history is clear, and the burden of proof otherwise rests squarely on the backs of EA Bioware.  And the other half of my stance is well documented also: worried though I may be, rooting for them I am.